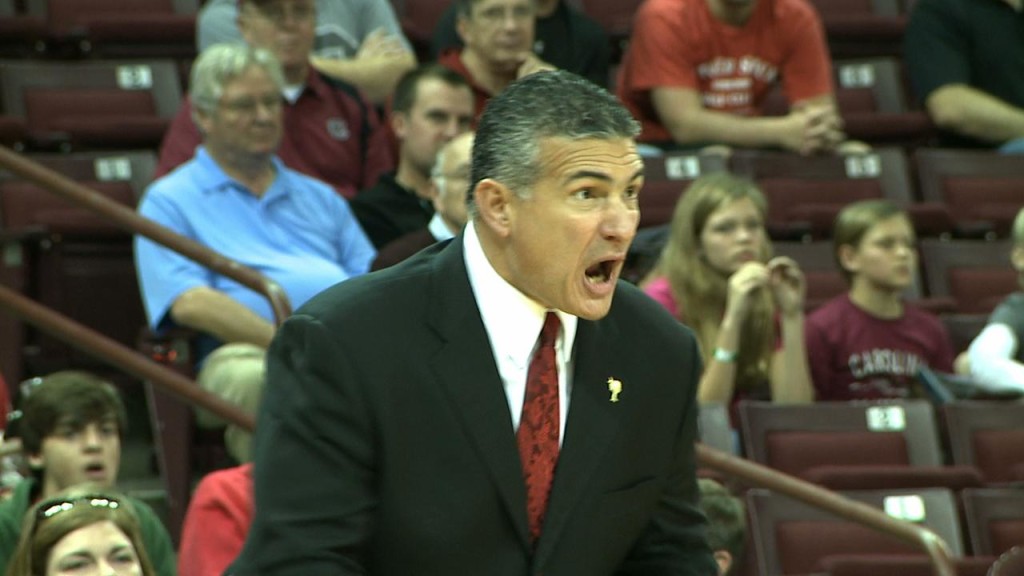 COLUMBIA, S.C. (USC SID) — South Carolina (5-3) fell to intrastate rival Clemson (5-2) 64-55 in non-conference action at Colonial Life Arena on Sunday afternoon. Junior guard Brenton Williams led the Gamecocks with 16 points. Two other Gamecocks registered double figures in the contest. Junior guard Bruce Ellington scored 12 and freshman forward Mindaugas Kacinas added 10. Freshman forward Michael Carrera and senior forward Lakeem Jackson brought down six rebounds a piece. South Carolina out-rebounded Clemson 36-29 and pulled down 17 offensive rebounds. Sophomore forward K.J. McDaniels led Clemson with 16 points and seven boards. Sophomore guard Rod Hall registered 15 and senior center Devin Booker scored 13 and tallied a game-high eight rebounds in the contest. Clemson scored 23 points off of 19 Gamecock turnovers. While adjusting to the physical play of the game, neither team converted a basket until just before the first media timeout. Kacinas hit freshman forward Laimonas Chatkevicius under the basket for the Gamecocks‘ first bucket of night and Hall drained a jumper on the ensuing possession to give Clemson a 5-3 lead. During an over four minute South Carolina scoring drought, the Tigers went on an 11-0 scoring run to pull out to a 14-3 advantage. Booker keyed the run for Clemson with back-to-back dunks. Trailing 23-11, the widest margin of the first half, South Carolina went on a 16-5 run to close the half. Just before the break, Kacinas hit a pair of free throws and Clemson held on for the last shot of the half. Hall could not connect and the Tigers took a one-point lead into the locker room at 28-27. After scoring the first points of the second half on baskets by Williams and Jackson, the Gamecocks took their first lead since 1-0 at 31-30. The Tigers responded with an 11-2 run to recapture the upper hand at 41-33. Kacinas halted the run with a 3. With eight minutes to play, senior guard LaShay Page and Williams hit back-to-back 3s to cut the deficit to single digits at 49-43. Ellington drained a jumper with 4:10 remaining to bring South Carolina to within four at 51-47, but the Gamecocks would not get any closer. Sophomore guard Damarcus Harrison immediately responded with a 3 for the Tigers and Clemson went 10-for-12 from the free throw line down the stretch to hold on for the 64-55 victory. South Carolina is back at home on Fri., Dec. 7, at 7 p.m. against Jacksonville. The non-conference matchup is slated to be broadcast on SportsSouth.