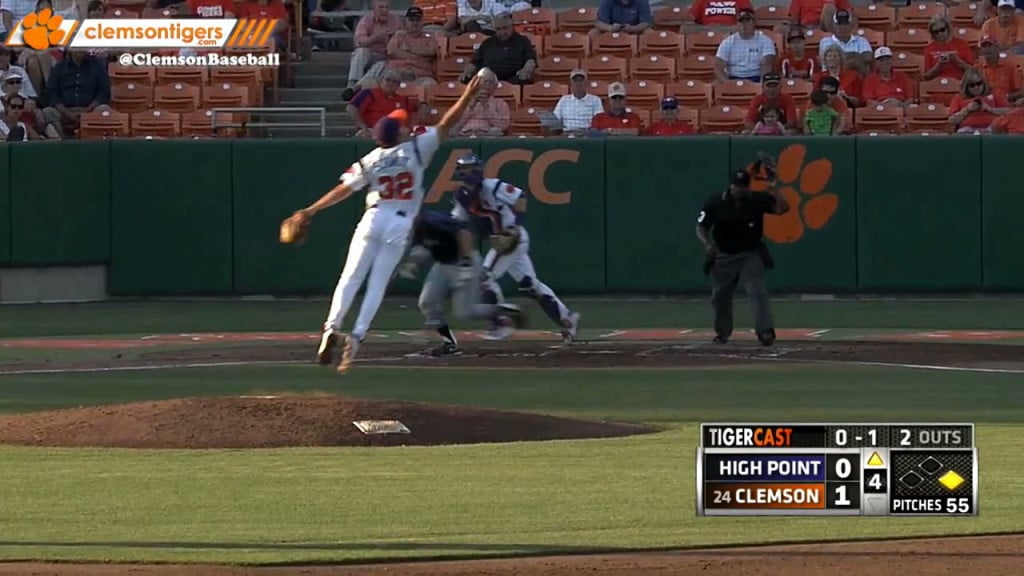 CLEMSON, S.C. (CU SID) — Four righthanders combined to toss a four-hit shutout in No. 24 Clemson‘s 1-0 win over High Point at Doug Kingsmore Stadium on Wednesday night. It was the first meeting between the two schools since 2008, as the Tigers (30-19) improved to 10-0 all-time against the Panthers (25-19). Clemson, who won its fifth game in a row, also reached the 30-win mark for the 40th consecutive season. Tiger starter Clate Schmidt (5-6) earned the win by allowing just four hits, no runs and three walks with four strikeouts in 6.0 innings pitched. Drew Moyer, Clay Bates and Matt Campbell all pitched a scoreless inning to close out the game, as Campbell recorded his seventh save of the season. Panther starter Jon Carlson (1-1) suffered the loss despite pitching 6.1 strong innings. Clemson dented the scoreboard in the third inning when Steven Duggar led off with a single and scored on Garrett Boulware‘s sacrifice fly. The Tigers travel to South Bend, Ind. to take on Notre Dame in a three-game series beginning Friday at 7:30 p.m. on ESPNU.