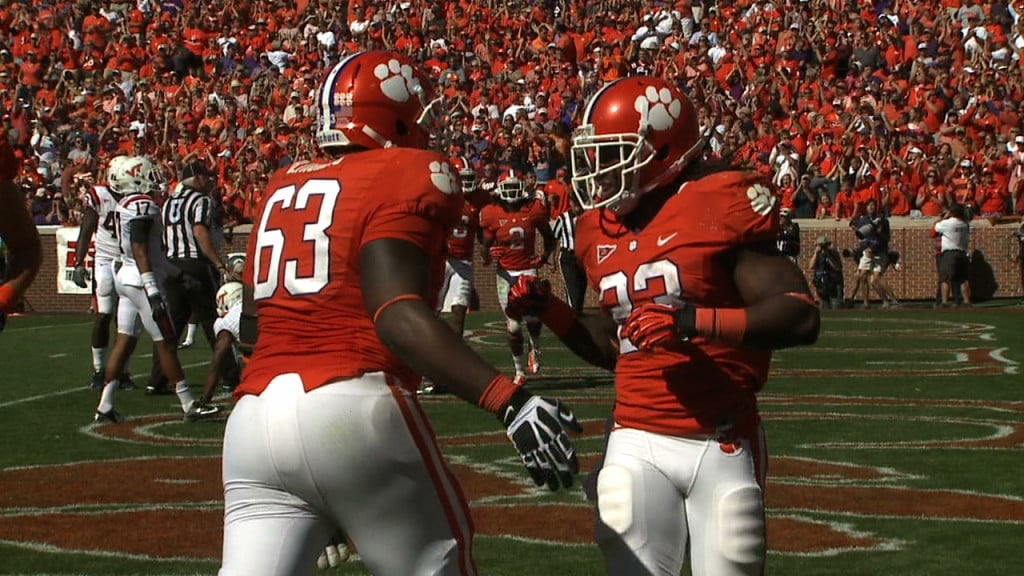 Clemson, S.C. (CU SID) — Former Clemson All-ACC offensive tackle Brandon Thomas was chosen in the third round of the NFL draft by the San Francisco 49ers late Friday evening. He was the 100th selection of the draft overall. Thomas joined Sammy Watkins as Clemson players taken in the top 100 picks. Watkins was the number-four selection of the draft by the Buffalo Bills on Thursday evening. Thomas was a common denominator in the starting lineup for Clemson‘s last three, squads that finished the season with at least 10 wins and a top 25 ranking each year. That includes 11-2 records and a top 10 final ranking in the USA Today Coaches Poll each of the last two seasons. Statistically he was a big reason Clemson has had its two highest scoring and top total offense seasons in school history each of the last two seasons. Overall, Thomas started 36 games at Clemson and played in 49. He was a first-team All-ACC tackle each of the last two years, the first Clemson offensive tackle to be a first-team selection twice since Barry Richardson in 2006-07. Richardson has gone on to play six years in the NFL. Thomas suffered a torn ACL during a workout with the New Orleans Saints in April. He had been listed as an early second round draft choice by many analysts prior to the injury, Thomas is the first Clemson offensive lineman taken within the first three rounds of the NFL draft since Joe Bostic was selected in the third round with the 64th pick by the St. Louis Cardinals in the 1979 draft. Thomas is the first Tiger drafted by the 49ers since Derrick Hamilton was a third round selection as a wide receiver in 2004. If Thomas makes the 49ers roster he will be the fifth offensive lineman from the 2009 Clemson team to make an NFL roster. The others are Thomas Austin, Chris Hairston, Antoine McClain and Dalton Freeman.