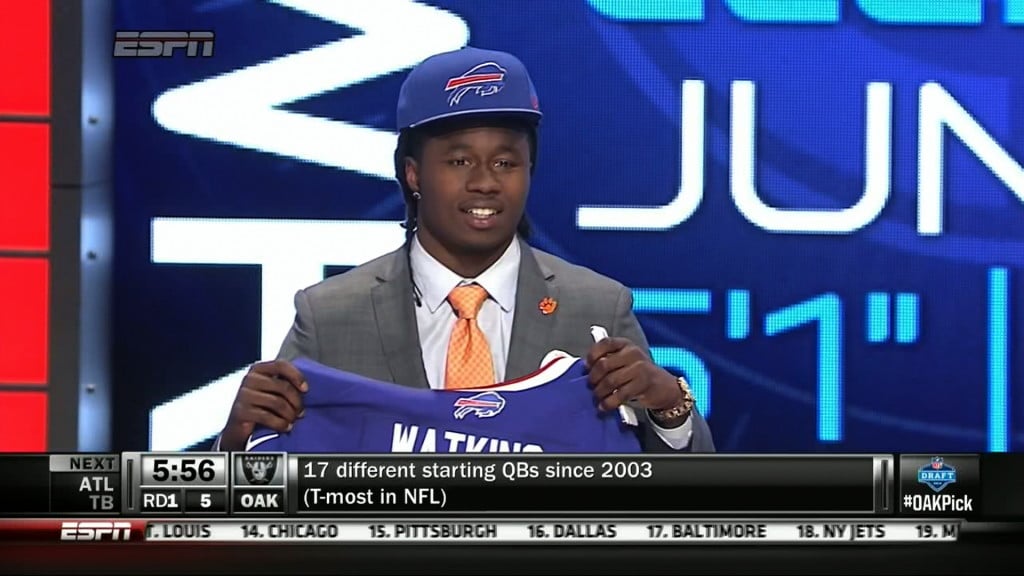 Clemson, S.C. (CU SID) — Bashaud Breeland, Martavis Bryant and Tajh Boyd were all selected in the 2014 NFL Draft on Saturday afternoon in New York City.  The three selections give Clemson five players selected over the three days of the selection process.

It marked the sixth straight year that Clemson had at least four players selected, the longest streak by an ACC school since a 10-year streak by Florida State from 1992-2001.

Getting drafted from Clemson is a good indicator of making it in the league.  Each of the last 26, and 41 of the last 43 Clemson players selected have gone on to play in the NFL.  Clemson had 27 former players on an NFL roster prior to this weekend’s draft.

“I am very excited about the opportunities in front of our former players based on the draft and free agent signings this weekend,” said Head Coach Dabo Swinney.  “This is realizing a dream for so many players.  What they do with the opportunity is what is important now.

“I was disappointed in that a lot of teams passed on Tajh until the sixth round.  He is a great player and I think the Jets got a steal getting him in the sixth round.  I told Andre Ellington last year when he was taken in the sixth round by the Cardinals that same thing.  Last year he led the NFL in yards per carry and is going to be their starting running back this coming year.

“Like  Sammy going to Buffalo, this is a great situation for Tajh.  Rex  Ryan knows what he can do and how hard a worker he is.  Tajh will be reunited with Dalton Freeman and will have Jacoby Ford to throw to.”

One Thursday night, Sammy Watkins was selected in the first round by the Buffalo Bills, the number-four selection of the draft.  Brandon Thomas was chosen in the third round by the San Francisco 49ers, the 100th pick of the draft.

Forty-six former Clemson football players have gone on to play in an NFL game after signing a free agent contract. Jaron Brown made the Arizona Cardinals as  free agent in 2014.

Other Notes on the draft

*Four of the five Clemson players drafted this year were offensive players. The list of offensive players includes wide receivers Sammy Watkins (1st round, Buffalo Bills)  and Martavis Bryant (4th round, Pittsburgh Steelers), the first time Clemson has had more than one receiver taken in the same draft since 1979 when Jerry Butler, Dwight Clark and Stan Rome were all selected.

*The only Clemson defensive player taken this year was Bashaud Breeland.  The cornerback was selected in the fourth round, the 102nd overall pick, by the Washington Redskins.  He hopes to join former Clemson defensive tackle Jarvis Jenkins with the Redskins defense.

*Florida State led all ACC teams in drafted players with seven.  Clemson and North Carolina were tied for second with five apiece.