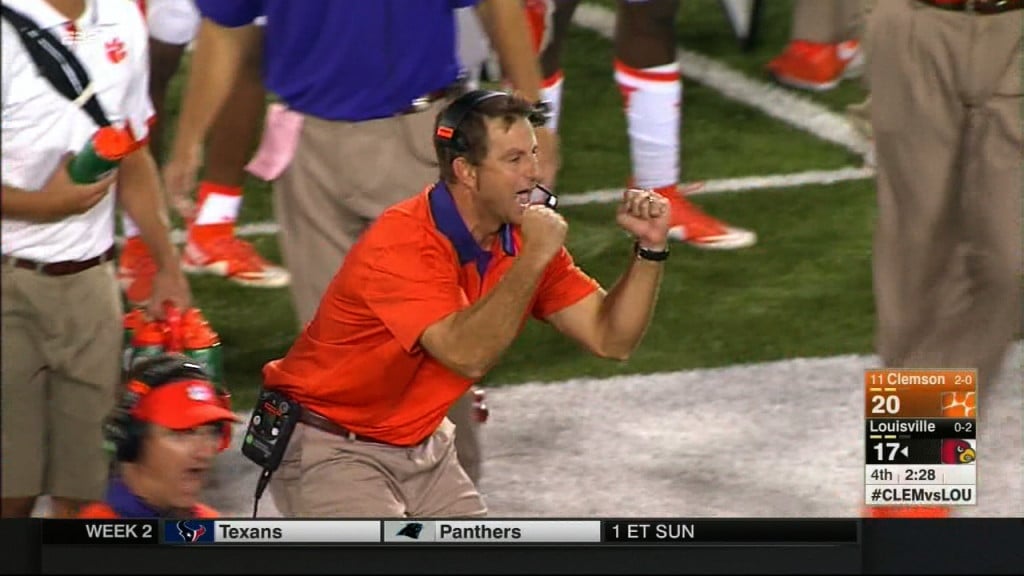 LOUISVILLE, Ky. (AP) — Deshaun Watson threw two touchdown passes, Wayne Gallman ran for 139 yards and No. 11 Clemson held off Louisville 20-17 on Thursday night in the Atlantic Coast Conference opener for both schools. Despite ragged stretches, including two interceptions by Watson, Clemson (3-0, 1-0) followed up routs of Wofford and Appalachian State with a solid conference win. A sophomore, Watson was spot on when needed, finding Hunter Renfrow and Jordan Leggett wide open down the middle for TD passes of 32 and 25 yards, respectively. Louisville (0-3, 0-1) started its third quarterback in three games with Kyle Bolin and used freshman Lamar Jackson and sophomore Reggie Bonnafon behind center in a search for offensive consistency. The combination kept the Cardinals within reach of Clemson long enough to have a last shot at a win, but Bolin’s desperation pass was intercepted by Jadar Johnson in the final seconds. The ending left Clemson players and fans relieved and happy with their second straight escape over Louisville, which has its first 0-3 start since 1984. After exiting last year’s victory over the Cardinals early with a broken hand, Watson completed 21 of 30 passes for 199 yards. Gallman rushed 24 times for his season-high yardage and helped the Tigers outgain the Cardinals 401-272. Clemson also spoiled Louisville’s second nationally televised appearance in three games, one that featured the presence of former heavyweight boxing champion Muhammad Ali in his hometown. Fans, meanwhile, dressed in black as part of a promotion that featured the Cardinals dressed in all-black helmets and uniforms with old English lettering. Watson eventually settled down from a slow start that included James Burgess’ one-handed interception of his first-quarter pass to direct Clemson’s first touchdown drive early in the second. He had plenty of time to find Renfrow for the 36-yard strike with 13:12 remaining for a 7-0 lead. Louisville’s only first-half answer was John Wallace’s 26-yard field goal set up by Bolin’s 55-yard pass to Jalen Smith, a play that made up nearly half of its 117 yards in the first 30 minutes. It also summed up the Cardinals’ offensive struggle whether Bolin, Jackson or Bonnafon was on the field. The Cardinals remained within reach and got to 20-17 in the fourth quarter on Traveon Samuel’s 100-yard kickoff return touchdown with 9:41 left. Wallace’s 38-yard attempt sailed wide left with 2:28 left, but Louisville still positioned itself to go for the win before Bolin’s pass was picked off. Bolin was 19-of-34 for 238 yards with two interceptions. Clemson kept the heat on all three quarterbacks, registering five sacks. Former Blythewood High School standout Greg Huegel, a freshman walk-on, had field goals of 36 and 27 yards for Clemson. Already short-handed with the absence of several players, including wideout Mike Williams (neck), the Tigers had right tackles Jake Fruhmorgen and Joe Gore go to the sideline with injuries. Gore eventually returned late in the first quarter, but Fruhmorgen sat on a trainer’s table with his left leg wrapped in ice.