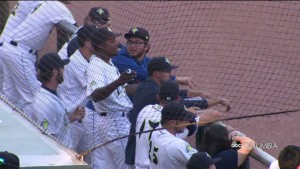 LAKEWOOD, NJ – Blake Tiberi capped off a phenomenal road trip on Tuesday afternoon at FirstEnergy Park. The 23-year-old picked up his 12th hit of the trip and also drove in a run. However, the effort wasn’t enough as Lakewood defeated Columbia 6-2 in the series finale.

Tiberi finished 12-for-24 (.500 batting average) at the plate in six games during the business trip. He’s currently on a seven-game hitting streak.

The Fireflies plated their lone run in the top of the sixth inning. Carlos Sanchez led off with a single and then had to be removed from the game immediately after due to injury. Jab Jabs replaced Sanchez as a pinch runner at first base. After Hansel Moreno walked, Jabs advanced to third on Oliver Pascual’s fly out to centerfield. Blake Tiberi smacked a ground ball to Lakewood’s shortstop Nick Maton, beat out a potential double play, (Moreno out at second) and Jabs scored from third.

Quincy Nieporte and Jhailyn Ortiz provided the bulk of offense for the BlueClaws. Nieporte smashed a two-run blast in the second inning. Ortiz knocked in two runs with a double down the left-field line in the fifth.

Nicolas Debora made his third start of the season for the Fireflies. The righty absorbed nine hits, allowed five earned runs, and punched out three batters. Debora started the year in the bullpen (11 appearances – 2.95 ERA) has made a transition to the rotation.

Columbia is off on Wednesday and returns home for a four-game series beginning Thursday against the Augusta GreenJackets. First pitch is scheduled for 7:05 p.m. at Spirit Communications Park and you can listen to the action live on FOX SPORTS Radio 1400 AM or online at columbiafireflies.com. The game is also available live on MiLB.tv. You can purchase your tickets for Thursday’s game HERE.