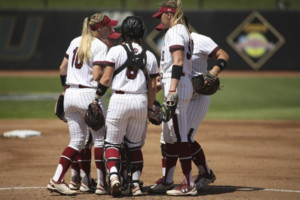 COLUMBIA, Mo. —- No. 16 South Carolina softball dropped a hard-fought 7-6 game in extra innings to Missouri on Saturday at Mizzou Stadium as the Tigers sealed the series victory. The two evenly-matched teams were tied at 6-6 through seven innings before Missouri opened the bottom of the eighth with a solo home run to walk it off.

The Gamecocks led 2-0 in the top of the first and 6-3 heading to the bottom of the fourth but the Tigers found a way to come back each time as they improved to 32-21 overall and 12-11 in SEC play.

Jana Johns blasted her 14th home run of the season in the top of the fourth to move her to second place all-time for homers in a season at Carolina and is now one off from tying the school record.

South Carolina (35-16, 8-14 SEC) continued its quick scoring ways with two runs in the first thanks to an RBI single off the bat of Alyssa Kumiyama to take a 2-0 lead through the first three outs before Missouri plated three of its own in the bottom frame to hold a 3-2 advantage through the first inning.

Carolina responded quickly once more with Jordan Fabian’s home run in the top of the second to tie it at 3-3 through two. Both teams traded a scoreless third before the runs came alive in the fourth.

The Gamecocks picked up three runs in the top of the fourth thanks to Johns’ third home run of the series and a Lauren Stewart RBI single to take a 6-3 lead. The Tigers later scored two in the bottom of the fourth to cut the Carolina lead to 6-5 through four.

This marked the first time this season in 27 opportunities Carolina dropped a game when scoring at least six runs.