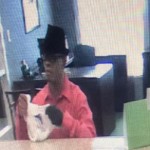 RICHLAND COUNTY, S.C. (WOLO) – The Richland County Sheriff’s Department continues to search for a man accused of trying to rob the TD Bank on Farrow Road.

Richland County deputies say the suspects seen here entered the business and passed the teller a note, but did not present a firearm, nor did he imply that he had one in his possession during the incident.

Authorities say the suspect was able to get away with an undisclosed amount of cash and was in the process of fleeing, when officials say an employee of the business grabbed his personal gun and opened fire on suspect before he fled the scene.

Officials say they have k-9 on the scene and so far have not been able to pick up a scent, but are reviewing  images that may have been captured on surrounding surveillance cameras. The number of suspects involved is not immediately available.

Authorities say at this time they plan to charge the suspect with entering a bank with intent to steal.

There are no reported injuries at this time. Stay with ABC Columbia for updates as this is still a developing scene.