According to Columbia Police, Wilberding was arrested shortly before noon Tuesday near the intersection of Laurens and Greene Streets.

Police say he is charged with two counts of Arson Second Degree and Possession of a controlled substance (Xanax).

According to officials,  Wilberding is accused of setting a fire on the porch at the 1716 Greene Street shortly after 6:00 a.m. Tuesday. Flames spread to the home next door (1710 Greene Street) causing significant damage to both buildings, say officials.

Officials also say, during the course of the investigation, CPD, CFD and SLED discovered that there was an attempt to set materials on a back porch of a home at the 1800 block of Greene Street on fire. Investigators say they continue to analyze evidence to determine if that fire was also intentionally set by Wilberding. 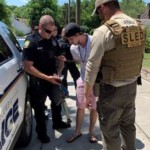 #CPDSC @ColaFire & SLED have detained a male in connection w/the Greene Street arson investigation. Investigators are in the process of talking with him now. We will provide updates as releasable info becomes available.

COLUMBIA, SC (WOLO)– Authorities are investigating two house fires Tuesday  morning, as arson.
Columbia Fire officials say the fire happened in the 17-hundred block of Greene Street around 6:30 Tuesday morning.
According to Columbia Fire Chief Aubrey Jenkins both properties  are owned by Governor Henry McMaster.
Firefighters say at least 12 people are displaced, but no one was hurt.

The Columbia Police Department has released this photo of the suspect.
He’s described as a slender white male with brown hair.
Chief Jenkins says multiple agencies will be involved in the investigation, including Columbia Fire, Columbia Police and SLED