NOAA Confirms that July was Hottest Month on Record

The average global temperature in July was 1.71 degrees F above the 20th-century average of 60.4 degrees, making it the hottest July in the 140-year record, according to scientists at NOAA’s National Centers for Environmental Information. The previous hottest month on record was July 2016.

Nine of the 10 hottest Julys have occurred since 2005—with the last five years ranking as the five hottest. Last month was also the 43rd consecutive July and 415th consecutive month with above-average global temperatures. 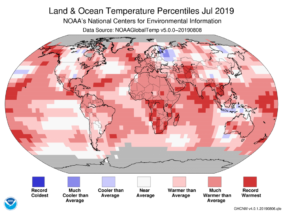