SC Governor declares State of emergency ahead of Dorian 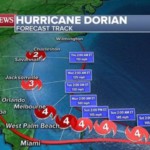 According to the Governor’s office, Governor Henry McMaster today issued an executive order declaring a state of emergency and urges South Carolinians to prepare for the possibility of Hurricane Dorian impacting the state.

The executive order enables all state agencies to coordinate resources and sets into effect the State Emergency Operations Plan.

According to officials, the declaration by the governor also authorizes state and local emergency management agencies to begin mobilizing assets and resources to be staged along the coast ahead of any potential impact from Hurricane Dorian.

“Given the strength and unpredictability of the storm, we must prepare for every possible scenario,” said Gov. McMaster. “State assets are being mobilized now and Team South Carolina is working around the clock to be ready, if necessary. We encourage all South Carolinians who may be impacted by Hurricane Dorian to be vigilant and prepare now – there is no reason for delay.”