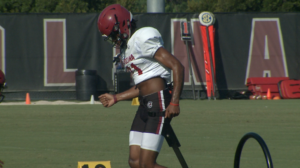 (ABC Columbia/FILE) Jamel Cook has been dismissed from the UofSC football team.

(ABC Columbia/FILE) Jamel Cook has been dismissed from the UofSC football team.

COLUMBIA, S.C. – In his Sunday night teleconference, Will Muschamp confirmed that the South Carolina football team has dismissed defensive back Jamel Cook.

The South Carolina Athletics Department confirmed to ABC Columbia earlier on Sunday that Cook was suspended for a violation of team rules.

According to the News & Observer, Cook is accused of physically assaulting a female several times during an argument on Gadsden Street.

This season was the first season of eligibility for Cook at South Carolina following his transfer from Southern California after his sophomore season in 2017. He’s only appeared in one game for the Gamecocks — week two against Charleston Southern.

Authorities say Cook was released on Saturday after posting a $5,000 bond and has a court hearing on November 18th.