October 2019 was the Warmest October on Record

Copernicus – The European Earth Observation Programme, that  focuses on observing the earth, has concluded that October 2019 was the warmest October on record.

“Globally, October was 0.69°C warmer than the average October from 1981-2010, making it by a narrow margin the warmest October in this data record. Europe generally saw above-average temperatures, with the exception of most of the north and north-west of the continent. Temperatures were much above average in large parts of the Arctic, while much of western USA and Canada experienced much below average temperatures.”

Here’s a link to the full article: https://climate.copernicus.eu/surface-air-temperature-october-2019 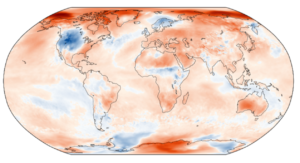