Check Out This Crater

Here’s a close-up view of a relatively “young” (less than 10 million years old) crater on the moon. The picture was taken from roughly 70 miles above the surface. It shows the crater is nearly about 13 miles in diameter and 10,000 feet deep. On the bottom is a large pool of ancient liquefied rock, left over from the giant impact that created the crater. That impact? A large meteor or asteroid – estimated to be about a mile across. It was traveling about 10 times faster than a bullet when it impacted the moon. Earthsky.org describes it this way:

“As typically happens, the impacting rock created a hole in the ground much larger than the rock itself. A tremendous amount of heat and pressure are released during the impact, which melts a lot of the rock. This created a temporary pool of melted rock – the melt pool – which sloshed and flowed, almost like water. Over time, the melted rock cooled and solidified, leaving the darker-colored melt pool we see today. You can still see where the melted rock flowed across the crater floor, filling depressions.” 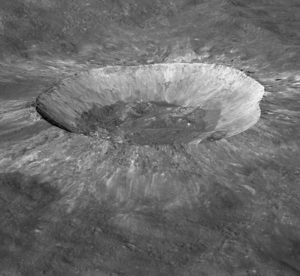