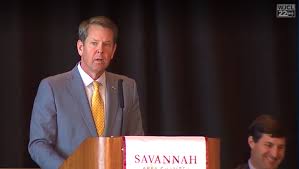 Georgia (WJCL/ABC) —In front of a crowd of hundreds in Savannah, Georgia Gov. Brian Kemp told violent gangs in the area to leave the state and move to South Carolina and Florida.

The speech took place Wednesday at the Savannah Chamber.

During the speech, Kemp talked about the continued success and growth of the Port of Savannah. He also touched on education and healthcare.

But when the subject turned to crime, his comments drew a reaction from the crowd.

Kemp took aim and violent gangs across the Savannah area and Georgia, and then went on to give them this advice:

“My message to any gang member in this area or anywhere in the state of Georgia, you should move to Florida or South Carolina.”

The line drew laughs and applause from the audience.

He said he said something similar the night before in Albany, telling those gangs to move to Alabama or Florida.

“I’m tired of our law enforcement officials being shot up for no reason by gangbangers,” the Governor said.

The governor did not stay after his speech to answer questions.

This was the Savannah chamber’s 213th annual meeting.