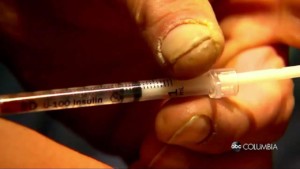 (WPDE) — According to the Centers for Disease Control and Prevention, for every 69 high-dose opioid prescriptions in 2018, only one naloxone prescription was dispensed.

Naloxone, the generic name for Narcan, is an overdose-reversing drug that has saved many lives in South Carolina during the ongoing opioid epidemic.

South Carolina State Representative Russell Fry is hoping to increase access to naloxone for those at risk of overdosing through Bill 4711.

The bill would require prescribers to offer a naloxone prescription to patients who have a history of a substance use disorder or have overdosed in the past.

It would also require prescribers to offer a naloxone prescription if the patient is being prescribed opioids and benzodiazepines, also known as benzos, at the same time.

This combination can be volatile, Dr. Gerald Harmon said, the vice president of Medical Affairs at Tidelands Health.

Benzos are anti-anxiety medications, like Xanax, and Harmon said they can be dangerous when taken with opioids.

“We are resistant to co-prescribing them together, and in that rare instance where we do have to, it’s not a bad idea to remind us, not necessarily require us, to get that naloxone out,” Harmon said.

Harmon said he has seen his fair share of narcotic overdoses.

“I’m more likely to write that as the cause of death on a death certificate than anything else in America if you’re under 50 years of age. Now that’s an epidemic,” he said.

Harmon said one aspect of Fry’s bill that he likes is that it could potentially increase access to naloxone for those with financial concerns.

While you can get naloxone without a prescription at many local pharmacies, Harmon said insurance companies usually don’t pitch in without one.

He said naloxone’s retail price can run between $40 and $60.

That’s why he said Fry’s bill requiring doctors to offer a prescription for naloxone to those at risk could decrease medical costs for patients.

However, he also said that filling a prescription involves a lot more paperwork and effort than just going to the pharmacy and picking up naloxone.

“Now that’s a little extra barrier of course because then they have to have a prescription. They have to go through the machinations of going to the pharmacist versus just grabbing it off the shelf, so it’s a little bit of an impediment, but if you think about the benefit versus the impediment, there may be a reasonable benefit,” he said.

Harmon said another potential problem with the bill is that it would require doctors to know if their patients have a history of substance use disorder or overdoses, and that’s something some patients may not be willing to share given the stigma surrounding drug use.

“Finding out if that patient is co-prescribed or has a history of overdosing or substance use disorder is not always readily available, and I don’t know how we’re going to mandate that,” Harmon said.

Harmon said he appreciates lawmakers’ efforts to bring awareness and potential solutions to the opioid epidemic, but he isn’t so sure this bill’s requirements would be practical in every doctor’s office.

“I think an awareness of it is good. I think the option is good, but once you start talking about requirements,” he said, hesitating.

Harmon said he thinks the bill might need more discussion before any decisions are made.

Fry’s bill was introduced and read for the first time on Jan. 14 and is currently in a House Committee.