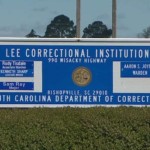 SLED authorities say charges are expected against the inmate.

According to investigators, per protocol, the employee was examined at a local hospital and was released.

Officials haven’t released the name of the inmate or the employee.

SLED is investigating this incident.