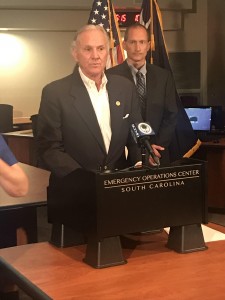 COUMBIA,SC (WOLO)- During a press conference on Sunday South Carolina Governor Henry McMaster announced that all schools in the state will be closed through the end of the month, effective immediately.

This will include Pre-K through high school and colleges, according to McMaster.

Officials say all children who rely on school meals will be taken care of and will get two meals per day.

Superintendent of Education Molly Spearman, says that 3,000 South Carolina school buses are being equipped with Wi-Fi to act as hotspots for students without internet access at home during the school closures.

The federal government is being asked for a waiver so the state can suspend federally required assessments which normally take place in the spring, Spearman said.

Spearman continued to say teachers and employees will get paid during school closures.

McMaster said they have no plans at this time on closing bars and restaurants.

However, public gatherings will be limited to 100 people or less, but that does not include state or local government meetings.

All elections will be postponed and rescheduled after May 1.

McMaster said the Federal Drug Administration approved MUSC for coronavirus testing and the testing will most likely start by the end of the week.

McMaster also urged parents to explain the seriousness of coronavirus to children, said there’s no need for the public to buy or wear masks. Health care professionals are the ones who need them.

The South Carolina Department of Health and Environmental Control said they have administered 263 tests, with 28 positive tests and 235 negative tests.

South Carolina has no widespread transmission right now and the majority of illnesses seen in SC have relatively mild symptoms, SCDHEC said.

Officials say fever is the main ingredient of coronavirus, but it must also include shortness of breath and coughing. Not one or two of three symptoms.

“This is a fluid situation. We are attempting to stay ahead of the situation. And anticipate what may happen. And do everything within our power to block the spread within those areas,” McMaster said.

Gilbert Leads Tigers Over No. 9 Virginia 8-2 In Game 1 of Doubleheader