Meanwhile, the Planet Continues to Warm

April was the second hottest April on record. See this from NASA:

April became the third month in a row to rank second-hottest on record for the globe after the year kicked off with the hottest January ever recorded in 141 years of record-keeping, according to scientists from NOAA’s National Centers for Environmental Information.

It was also the second-warmest year to date (January through April), as Arctic sea ice continued its retreat.

Below are highlights from NOAA’s latest monthly global climate report:

Climate by the numbers

The average global temperature in April was 1.91 degrees F (1.06 degrees C) above the 20th-century average, making April 2020 the second-hottest behind April 2016.

The eight warmest Aprils have all occurred since 2010, and April 2020 marked the 44th consecutive April above the 20th-century average.

Year to date | January through April

The global temperature from January through April was 2.05 degrees F (1.14 degrees C) above average, which is the second-hottest January-through-April period on record behind 2016.

Europe and Asia had their warmest year to date on record, while the Caribbean region and South America had their second warmest. No land or ocean areas had record-cold temperatures.

Here’s the link to  the whole article: https://www.noaa.gov/news/april-2020-was-earth-s-2nd-hottest-april-on-record 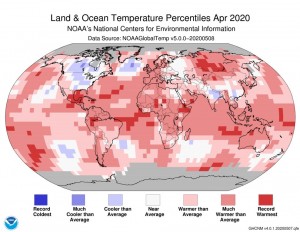 Just How Much Ice is Melting Each Year