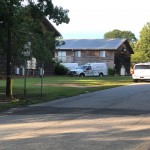 Officials say the shooting happened at the Cypress Cove Apartment Complex on Byron Road after 2 a.m.

According to authorities, the shooting killed a male victim & two others suffered non-life threatening injuries.

Investigators say they have been talking with people and collecting evidence from the scene.

If you have any information on this incident, submit a tip at crimesc.com.