The Arctic is Warming Very Fast – Not Good News

The Arctic (area around the north pole) is warming between 2 and 3 times faster than the rest of the planet. That’s not good news. The area around the north (and south) pole acts as the planet’s air conditioner. As the arctic heats up, the ice melts. And remember a few things: 1) ice is very effective at reflecting the sun’s rays, and 2) water is very effective at absorbing the sun’s rays. So as the sun shines more and more on water and less and less on ice, the oceans simply absorb that heat. This is very bad news for our planet.

Some images below show the situation. The first one shows that the average temperature in the arctic over the past year is roughly 7 degrees above the long-term average. Yes 7 degrees! The second image show the extent of the arctic sea ice. It’s currently at its second lowest level in recorded history. 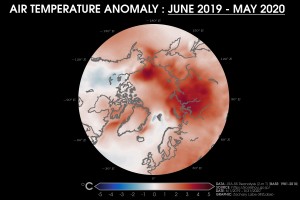 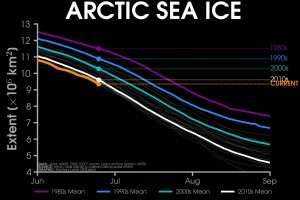