ORANGEBURG, SC (WOLO) – Five people were killed Thursday after an accident on Interstate 26 near Orangeburg. 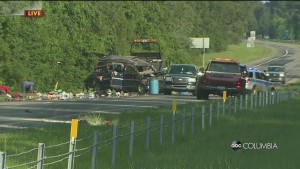 Crews work to clear the scene where a deadly accident happened on I-26 at mm 147, Thursday July 2.

The accident shut down all westbound traffic for hours Thursday afternoon.

According to the South Carolina Highway Patrol, an SUV with seven passengers was going eastbound at the 147 mile marker around 12:30 p.m. when the vehicle left the roadway into the median, hit the median cables and crossed into the oncoming traffic.

The 2001 Chevrolet SUV hit two oncoming tractor trailers and overturned before coming to a stop.

Five of the people inside died; the other two were taken to the hospital. SCHP said they had to investigate where each person was sitting. SCHP said both tractor trailer drivers were wearing their seat belt and were not injured.