Comet NEOWISE has been visible in the morning sky, but now it’s visible in the evening sky. You’ll need binoculars. And you’ll need to know where to look. So here are some tips from EarthSky.org.

“Now, look below for a couple of evening charts. By mid-July (around July 12-15), the comet will also become visible at dusk (just after sunset), low in the northwest horizon, for observers in the mid- and northern U.S. How can it be visible in both dawn and dusk? The answer is that the comet is now very far to the north on the sky’s dome. For those at latitudes like those in the southern U.S. (say, around 30 degrees north latitude), the comet is very nearly but not quite circumpolar, that is, it’s nearly in the sky continually, but it isn’t quite … that’s why we at southerly latitudes will have a harder time spotting it in the evening.

The farther north you are (latitudes like those in Canada and the northern U.S.) the more opportunities to see the comet you will have, since the celestial visitor will appear circumpolar. That is, it’ll be in the part of the sky that circles around the north pole star, above our horizon at all times.

If the comet remains at its current brightness, it might be even easier to spot in the evening during the second half of July than it has been in the morning sky so far. The comet will be gradually higher each night, just below the Big Dipper, as seen in the evening charts, below.

Comet NEOWISE will be closest to Earth on July 22-23, 2020. It will pass at some 64 million miles (103 million km) from our planet. The good news is that – if the comet continues looking great – the view during the night of closest approach should be nice for many of us at temperate latitudes in the Northern Hemisphere. Although binoculars are required for the celestial visitor, it will be visible at the same time we see a beautiful crescent (not too bright) moon.”

Here’s that the Comet and its tail look like.

This is where it will be visible over the next week or so. 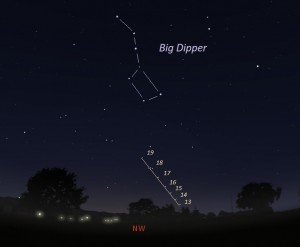 This is where it will be visible on July 23rd.

Isaias in the Record Books

SC Emergency officials urge residents to be prepared for Isaias