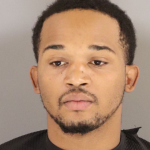 Authorities say Ronnie Abram, Jr., 24, is accused of threatening to rob a woman at gunpoint on December 4.

According to investigators, it happened outside of a home on Brunhill Street.

Police reported that Abram let the victim go and no injuries were reported.

If you know where he is, please submit a tip to Crimestoppers at crimesc.com.