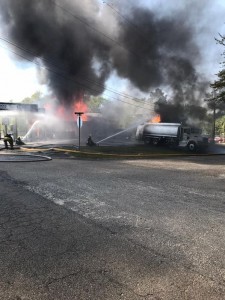 Authorities say it happened at Derrick’s Service Center, which operates as a gas station and a service garage, on the 300 block of Broad Street.

According to investigators, upon arrival, they saw several vehicles, a gas tanker, and the gas station on fire.

Officials say they believe the fire started when a spark ignited fumes of the gas truck, while it was offloading its gas supply at the gas station.

Although the fires were extinguished, the gas station is a total loss, while four vehicles and the gas tanker were destroyed.

Firefighters from the Columbia Airport, Batesburg-Leesville and Irmo assisted in extinguishing the fires.