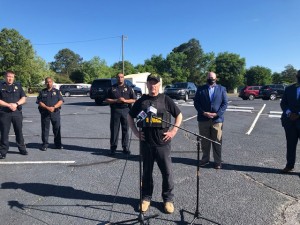 Authorities say it happened around 7 a.m.

According to investigators, the soldier, who is a trainee, was armed with a rifle and escaped Fort Jackson.

Sheriff Leon Lott says the suspect, who was dressed in physical training clothes, went to I-77 and tried to get into vehicles, before hijacking a school bus with 18 kids and the bus driver inside, at a bus stop on Old Percival Road.

Authorities say the kids and the driver later got off the bus; he later drove it and abandoned it, leaving the rifle inside.

According to deputies, he was later arrested without incident.

Officials say none of the kids or the bus driver were injured.

Authorities say the suspect is facing multiple charges, including kidnapping.

Columbia Police and Highway Patrol helped in the search for the suspect.

This case remains under investigation.

Stay with ABC Columbia for updates.

Tree trimming set for some Columbia Neighborhoods over next two weeks