Multiple fire agencies, including Irmo, Lexington, Columbia, and West Columbia, and 24 fire trucks were called to the scene at the Peachtree Place apartments around noon Saturday. 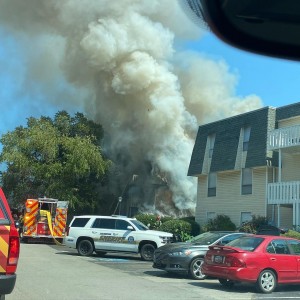 According to Irmo Fire officials, the fire wasn’t considered under control until around 4 p.m. Due to water supply issues in the neighborhood, officials say crews ran out of water and had to call in tanker trucks to help.

Two firefighters suffered minor injuries in the blaze, but were treated on scene and got back to work. No residents were injured in the fire, but the 20 apartments in the building are believed to be a total toss.

The Red Cross is working with the residents who have been displaced.

The cause of the fire is still under investigation.