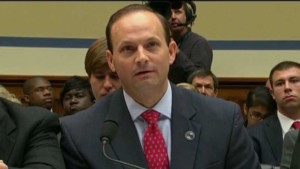 Columbia, S.C. (WOLO)–Attorney General Alan Wilson says he plans to sue the federal government over vaccine mandates for healthcare workers.
Wilson released a statement Monday reading, “President Biden has once again overstepped his legal authority and overreached his power.  The president is not above the law. I fully support the rights of our healthcare heroes in opposition to mandatory COVID vaccines. We intend to file suit in the very near future.”

Attorney General Wilson (R) was also part of a lawsuit filed to prevent vaccine mandates for companies with 100 or more employees.

That lawsuit resulted in a court order blocking the mandate.

The US Justice Department on Monday asked the 5th US Circuit Court of Appeals to lift the temporary order and argued against a permanent block of the mandate saying the states and businesses challenging the mandate haven’t shown how their claimed injuries “outweigh the harm of (stopping) a standard that will save thousands of lives and prevent thousands of hospitalizations.”