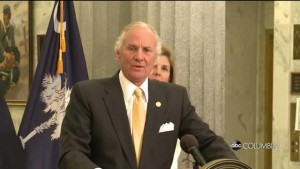 Columbia, SC (WOLO) — Governor Henry McMaster has reached out to South Carolina Superintendent of Education Molly Spearman requesting that she immediately launch an thorough investigation into reports of ‘obscene and pornographic materials’ in public schools here in South Carolina.

The governor put the request in the form of a letter he penned to Spearman after he says he was contacted by concerned parents that sent him examples of pornographic materials they claimed to have located in schools in Fort Mill.  The Governor then also contacted the South Carolina Law Enforcement Division (SLED) to find out if any state laws were broken as a result of the materials allegedly discovered.

The Governor writing in the letter in part saying,

“By way of example, it is my understanding that concerned parents were recently required to petition the Fort Mill School District to remove a book from a school’s physical or digital library, titled Gender Queer: A Memoir, by Maia Kobabe,”….“If school personnel had performed even a cursory review in this particular instance, it would have revealed that the book contains sexually explicit and pornographic depictions, which easily meet or exceed the statutory definition of obscenity.  Thus, I am concerned that further examination may identify additional instances in which inappropriate materials have been introduced into our State’s public schools.”

The Governor going on to say,

“For sexually explicit materials of this nature to have ever been introduced or allowed in South Carolina’s schools, it is obvious that there is or was either a lack of, or a complete breakdown in, any existing oversight processes or the absence of appropriate screening standards.  Therefore, I respectfully request that the Department of Education promptly investigate this matter, on a statewide basis, and identify whether any systemic policy or procedural deficiencies exist at the state or local levels, or both.”

Governor McMaster not only wants S.C. Superintendent Spearman and SLED to investigate the claims, but is also asking the Department of Education or the State Board of Education to enact standards and directives that would apply to all South Carolina public schools to keep pornographic materials from getting in and having the ability to pinpoint any other  materials that fall under that category that may already be inside of  school libraries.