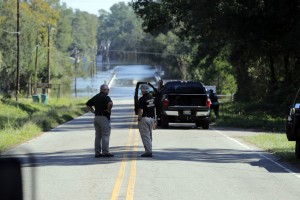 FILE – Responders congregate near where two people drowned the evening before when they were locked in a Horry County Sheriff’s department transport van in Marion County, S.C. A deputy charged in the deaths ignored barricades and drove into rapidly rising floodwaters against advice from his supervisors and officials on the South Carolina highway, a prosecutor said Monday, May, 16, 2022. (AP Photo/Gerald Herbert, File)

COLUMBIA, S.C. (AP) — A prosecutor says a deputy in South Carolina charged in the deaths of two women who drowned in a locked police van in 2018 ignored barricades and drove into rapidly rising flood waters against advice from his supervisors. Former Horry County deputy Stephen Flood is on trial on two counts of involuntary manslaughter and reckless homicide for the drownings. He was taking the women to mental health facilities under a court order as rain from Hurricane Florence inundated eastern South Carolina. Flood’s lawyer on Monday said his client is a scapegoat for supervisors who wanted him to take the shortest route and officials who let him drive around a barricade.