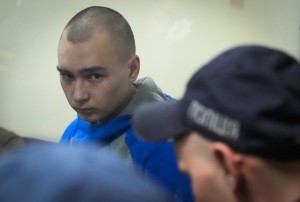 Russian army Sergeant Vadim Shishimarin, 21, is seen behind a glass during a court hearing in Kyiv, Ukraine, Wednesday, May 18, 2022. The Russian soldier has gone on trial in Ukraine for the killing of an unarmed civilian. The case that opened in Kyiv marked the first time a member of the Russian military has been prosecuted for a war crime since Russia invaded Ukraine 11 weeks ago. (AP Photo/Efrem Lukatsky)

KYIV, Ukraine (AP) — A 21-year-old Russian soldier facing the first war crimes trial since Moscow invaded Ukraine has pleaded guilty to killing an unarmed civilian. Sgt. Vadim Shishimarin could get life in prison for shooting a a 62-year-old Ukrainian man in the head through an open car window on Feb. 28. Shishimarin is being prosecuted under a section of the Ukrainian criminal code on the customs of war. Ukraine’s prosecutor general has said her office was preparing cases against 41 Russian soldiers for alleged war crimes such as bombing civilian infrastructure, killing civilians and rape. Prosecutors plan to continue presenting evidence against Shishimarin following his guilty plea on Wednesday, although the trial is like to be shorter.