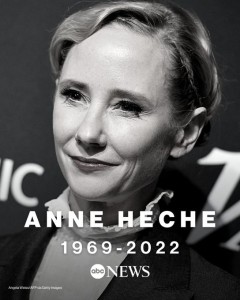 ABC NEWS-Anne Heche has died at the age of 53 after suffering serious injuries in a fiery car accident in Los Angeles, her family says.

Heche was declared brain dead Thursday night but has been kept on life support for organ donation, and her heart is still beating, her representative said Friday.

The actress was driving on Aug. 5 when she crashed into a home in the Mar Vista neighborhood of Los Angeles, engulfing her car and the house in flames, according to Los Angeles police and fire officials.