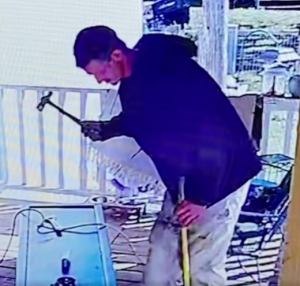 (Source: Kershaw County Sheriff’s Office)
KERSHAW COUNTY, S.C. (WOLO) – Kershaw County Sheriff’s Office says a theft suspect was caught on stolen security footage.
The sheriff’s office was investigating a burglary involving the theft of a safe containing multiple firearms. The investigation led to a search warrant on a suspect’s residence. During the search, investigators located evidence from the burglary as well as a stolen video surveillance system from another crime.
Investigators say the suspect installed the stolen surveillance system at his own residence and was caught on video breaking into the safe which contained the stolen firearms from the burglary.
According to the sheriff’s office, a person who violates the provisions of the safecracking section is guilty of a felony and, upon conviction, must be imprisoned not more than thirty years.
Categories: Local News, News
Tags: caught on camera, stolen firearms, stolen safe, Theft
Share