Powerball jackpot rises to $825 million, 5th largest in US 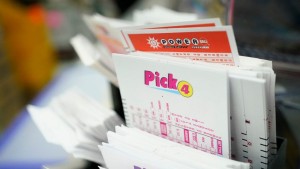 ABC NEWS—A massive lottery jackpot got a little bigger Friday as the top Powerball prize climbed to an estimated $825 million ahead of Saturday night’s drawing.

The Powerball jackpot ranks as the fifth-largest in U.S. history, though it’s good to keep in mind that it has grown so large because no one has hit all six numbers since Aug. 3. That’s 36 consecutive draws without a jackpot winner.

Why the extended winless streak? Because the odds of winning the jackpot are an abysmal one in 292.2 million. The long odds are designed to limit jackpot winners, which in turn allows the grand prize to grow so large.

The $825 million prize is for winners who choose to take their riches through an annuity, paid annually over 29 years. Nearly all winners opt for cash, which for Saturday’s drawing would be an estimated $410.2 million.

Those winnings also would be subject to federal taxes. Many states tax lottery winnings, too.

Powerball is played in 45 states, as well as Washington, D.C., Puerto Rico and the U.S. Virgin Islands.