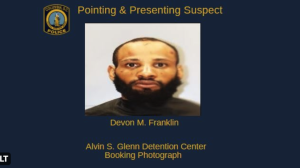 Franklin has been charged with Possession of Cocaine and Possession with Intent to Distribute Marijuana, say police.

Police say Franklin was arrested after refusing to come out of a Wood Creek Farms home for multiple hours and pointing a gun at relatives. He is prohibited from going back to the neighborhood, say authorities.

CPD says with the assistance of Agents with the South Carolina Law Enforcement Division they arrested Franklin without serious injury early Friday.

Police say Franklin is being charged with Three Counts of Pointing and Presenting a Firearm at a Person.

An additional charge of Breach of Peace of a High and Aggravated is forthcoming, say Columbia Police.

Police say after his arrest, he was taken to a local hospital and released to the Alvin S. Glenn Detention Center.

Columbia, SC (WOLO) —  The Columbia Police Department has been attempting to gain access to a man who has been barricaded inside of a home for more than six hours.  According to the authorities, they received a call to respond to a home in the Wood Creek Farms community just after 4 p.m. Wednesday evening. CPD says the unidentified man inside of the home is “likely armed” and police say he has reportedly been exhibiting “erratic” behavior while refusing to come out of the home.

At last check (10:30 p.m.), CPD reported that the family is safe and unharmed. Police say they currently have teams of trained negotiators on the scene trying to speak with the individual while  maintaining their distance in a safe location, along with additional resources police tell ABC Columbia News are on standby and within close proximity.

Red Kettles up across the Midlands