We’re Going Back to the Moon

It’s been decades since the United States has been to the moon.  Well that’s changing.  One of the first big steps in getting humans back on the moon took place last night with the NASA’s launch of Orion – the spacecraft that will eventually take astronauts to the moon.   The mission is called Artemis and this first phase is called Artemis 1.  You can read all about it here. 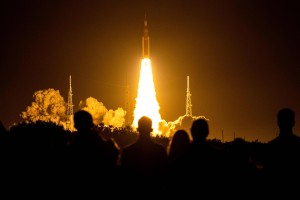 Scientists May Have Found a Shark That's 400 Years Old!