Two Dead In Helicopter Crash on I-77 in Charlotte, NC 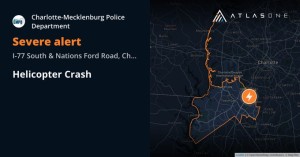 CHARLOTTE, N.C. (WCCB)– Officials say two people have died in an accident involving a helicopter on the southbound side of Interstate 77 near Nations Ford Road (mile marker 4) in Charlotte, North Carolina.

The wreckage appears to be on the banking along the southbound side of I-77 but several lanes are closed as response crews attend the scene.

The crash happened around 12pm Tuesday, Medic confirmed that 2 people died on the scene. It’s not clear if both the deceased were aboard the helicopter.

This is a Developing Story.