The US holds on to defeat Iran, 1-0, advancing to the knockout round of the World Cup

The U.S. defeated Iran 1-0 to advance to the second round. 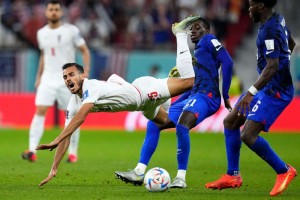 Tim Weah of the United States, center, challenges Iran’s Abolfazl Jalali during the World Cup group B soccer match between Iran and the United States at the Al Thumama Stadium in Doha, Qatar, Tuesday, Nov. 29, 2022.

ABC NEWS—The United States has advanced to the knockout stage of the World Cup with a 1-0 win over Iran.

Walker Zimmerman played hero for the U.S. in the 98th minute when he cleared a loose ball from just feet in front of their net.

The U.S. finished second in Group B and will face the Netherlands, the winner of Group A, in the knockout round.