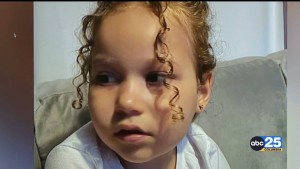 Investigators say she was found safe in Virginia Friday afternoon.

Jeter had not been seen since her mother was found dead on Thanksgiving. She was believed to be with her father, say authorities.

The Orangeburg County Sheriff says her father is in custody. Investigators say the father is now facing a murder charge.

This is a developing story, stay with ABC Columbia News for updates.

COLUMBIA, S.C. (WOLO)— The family of Aspen Jeter, the missing 5-year-old, is speaking out for the first time since her disappearance.

Officials say Aspen’s mother, Crystal Jumper, was found shot to death in her bed on Thanksgiving day following a welfare check to her home.

Aspen is believed to be with her father, Antar Jeter, where police say the two were seen in late November in a department store parking lot in Fayetteville, North Carolina.

“They were actually in Fayetteville, NC on the 28th and on the 30th they were actually spotted in Raleigh, NC. We focused our attention to North Carolina in the beginning because of our investigation and it panned out to be true. At this point, we’re not sure if they’re still in the vehicle which is a 2015 Mazda 6 and blue in color,” says Orangeburg County Sheriff Leroy Ravenell.

“Mr. Jeter we understand how much you love your daughter. I think by all accounts everybody knows and the pictures that have circulated of the smile on your face Mr. Jeter and the smile on Aspen’s face it’s very clear that your daughter loves you and you love her. We know that you would never do anything to hurt her but its not safe to just be out here. You don’t have to feel afraid to come back to Orangeburg, you don’t have to feel afraid to talk to the authorities,” says Bamberg.

Aspen’s family says they’re deeply concerned as she is non-verbal and unable to walk.