Governor Henry McMaster announced the largest economic development in state history with the expansion of Redwood Materials in Berkeley County, a $3.5 billion investment. 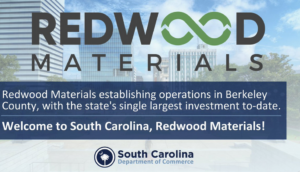 The company is a producer of anode and cathode battery components for electric vehicles and recovers more than 95% of minerals and elements like nickel, cobalt, lithium, and copper from batteries and reintroduces them into the supply chain through the battery components it creates for U.S. battery manufacturers, say officials.

In a release provided to ABC Columbia News, Gov. Henry McMaster says, “Redwood Materials’ record-breaking announcement shows that our state’s strategic plan to remain a top destination for automobile manufacturers and their suppliers as the industry innovates is working. This $3.5 billion investment, and the 1,500 jobs it will create in Berkeley County, is a transformative accomplishment that can only be attributed to the strong, talented, hardworking South Carolinians who make our state as great as it is.”

Operations at the 600-acre campus at Camp Hall Commerce Park in Ridgeville are expected to begin in 2023.