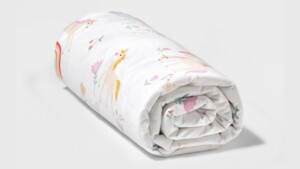 (CNN) — Target is recalling more than 200-thousand ‘Pillowfort’ brand weighted blankets for kids after two children died while using them.
The company says the issue is that children can become trapped inside the blanket if they unzip the cover.

Target has received four reports of it happening. Two of victims girls were four and six years old when they died back in April.
The blankets were on Target store shelves from December of 2018 until September of this year.

Anyone who bought one can return to the location where it was purchased for a refund.