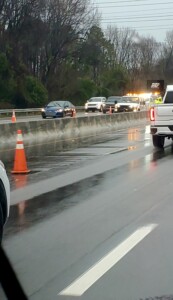 The severe weather blocked parts of 1-20 in Richland County beginning around 11:15pm Wednesday.
According to South Carolina troopers, due to the heavy rainfall, there was flooding on both the eastbound and westbound lanes near the 68 mile marker.
Both of the left lanes, closest to the median, were closed for nearly two hours.