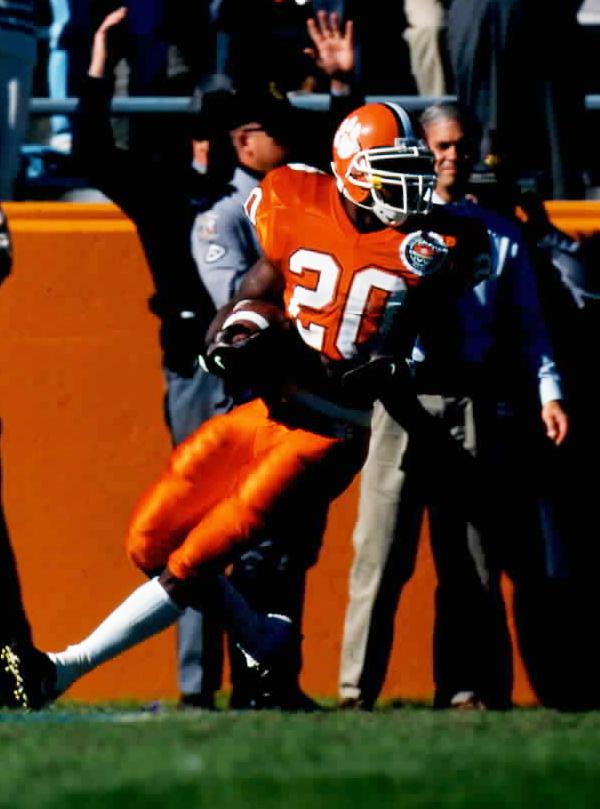 Clemson, SC (CLEMSON SID) — Former Clemson All-American Brian Dawkins announced his retirement from the National Football league on Monday. The native of Jacksonville. FL played 16 years in the NFL and was a nine-time Pro Bowl selection. He has had arguably the greatest NFL career among former Clemson players and is a strong candidate to some day become the school‘s first entry in the NFL Hall of Fame. “The Lord has blessed me to play in the NFL for 16 years,” he wrote on his Twitter Page in making the announcement Monday morning. “I would like to thank the Eagles and the Broncos for believing in me. I would like to thank all my teammates and coaches that I have been blessed to go to battle with.”¨ one space “¨“…Along with you, the fans, for helping make my career one that I have enjoyed tremendously,” he continued. “In other words, I am announcing my retirement from the NFL. His 16 seasons playing safety tied Paul Krause and Eugene Robinson for the most in NFL history. In nine of those seasons — including his final campaign in 2011 — Dawkins was selected to the Pro Bowl. That ties John Lynch for the second-most by a safety in league history. Ken Houston, who played with Houston and Washington from 1967-80 played in 10. “Congrats on a successful 16-year career,” NFL Commissioner Roger Goodell wrote to Dawkins on Twitter. “Great player. More importantly, great man in his community and locker room.” Dawkins spent three seasons with the Broncos, heading to the Pro Bowl in two of them. He accumulated 233 tackles, five sacks, three interceptions, 21 passes defensed, four forced fumbles and three fumble recoveries.”¨one space “¨ For his career, Dawkins has the most forced fumbles by a defensive back — 36 — since the statistic was tracked starting in 1994, he ranks third all-time among defensive backs with 26 career sacks, and has 1,527 career tackles.”¨one space “¨He is one of just two players in league history with at least 35 career interceptions and 25 career sacks. Ronde Barber, who played at the University of Virginia almost concurrently with Dawkins, is the other. “Brian Dawkins is one of the best to ever play the game, a future Hall of Famer who changed the way his position is played,” Head Coach John Fox said in a statement. “In many ways, he helped my job as a coach with his great leadership and preparation. He brought so much to the table and was such an enormous asset to our football team. “His contributions go far beyond the wins, interceptions, sacks and Pro Bowls he accumulated during his career. Brian is the definition of class and is what you want in a leader. I know our players, coaches, fans and so many within the National Football League feel the same way.” Dawkins is best known as a man of character. He was one of three finalists for the Walter Payton Award as NFL Man of the Year in 2008. He was recognized as the 2008 Father of the Year by the American Diabetes Association for his dedication to his family and his community work. Dawkins played for the Tigers from 1992-95. It was in 1995, as a senior, that he made a huge move to become one of the best safeties in nation. That year his reputation as a fierce hitter developed when he made 89 tackles, including four tackles for loss. He had six interceptions to lead the ACC and ranked eighth in the nation, and had an additional two recovered fumbles for eight total takeaways. One of the most memorable games of his career took place against Duke on his Senior Day in 1995. He had three interceptions in the game, all in the second quarter, a performance that is still a Clemson record for a single quarter and tied for the single game mark. He was named National Defensive Player of the Week by Sports Illustrated for that game. It was a fitting performance on another front in that it was Hall of Fame day at Clemson. Fourteen years later he was named to Clemson‘s Athletic Hall of Fame. At the end of the 1995 season, he was named a second-team All-American by the Associated Press and The Sporting News. He concluded his career with 15 career takeaways, third best in Clemson history. “He is one of the top guys I have every coached as a player and a person,” said current Clemson co-defensive coordinator Charlie Harbison, who coached Dawkins during his senior year in 1995. “He had the passion and the drive for the game. He focused on being the best player he could be every day. He has been a great role model for so many Clemson players since his retirement. I was talking with Robert Smith (current Clemson defensive back) just the other day and he was talking about his upcoming off season. He talked about Brian Dawkins and wanting to emulate his worth ethic this off-season. “Clemson University is blessed to have Brian Dawkins as a graduate. He represented this school with class when he played here and for his 16 years in the NFL. He is truly one of the most respected Sons of Clemson and I was blessed to coach him.”