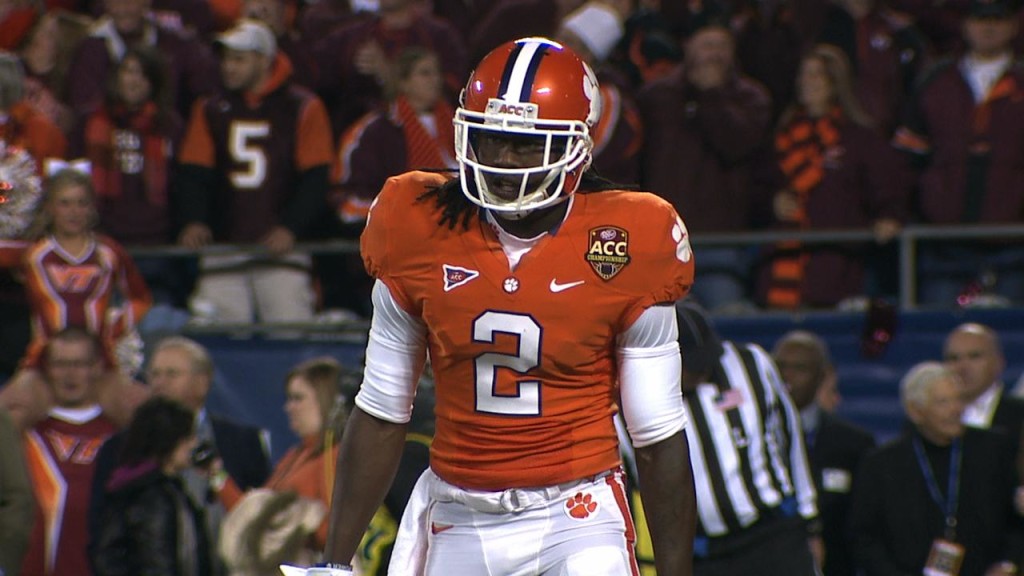 GREENSBORO, N.C. (ACSMA & theACC.com) — Florida State, seeking its first league title since 2005, is the consensus choice to win the Atlantic Division and to defeat Virginia Tech in the 8th Annual Dr Pepper ACC Football Championship Game according to a poll of media members attending this week’s ACC Football Kickoff at the Grandover Resort in Greensboro, N.C. This is the second straight year that Florida State has been projected to win the ACC Football Championship, as the Seminoles were tapped by the media last July to win the 2011 title. Clemson was the actual 2011 ACC Football Champion, defeating Virginia Tech 38-10 in the 2011 ACC title game in Charlotte. Clemson sophomore wide receiver Sammy Watkins (Fort Myers, Fla.), who set ACC single-season freshman records for receptions (82), reception yardage (1,219) and receiving touchdowns (12), was the choice for Preseason Player of the Year. Watkins received 25 votes and nudged out Virginia Tech junior quarterback Logan Thomas (Lynchburg, Va.) who had 21 votes. The Preseason Player of the Year ballotting was a close, four-person race with Florida State senior quarterback EJ Manuel (Virginia Beach, Va.) coming in third with 19 votes and Watkins’ junior teammate, quarterback Tajh Boyd (Hampton, Va.), finishing fourth with 18. The Seminoles of coach Jimbo Fisher, who finished second in the Atlantic last year, received 72 of 95 firstplace votes in that portion of the balloting. Sixty of the 95 also said Florida State will prevail in the title game,set for Dec. 1 at Bank of America Stadium in Charlotte, N.C. The Hokies, who have captured five of the seven Coastal Division crowns since the ACC went to divisional play in 2005, got 83 votes in the Coastal election. Eighteen electors picked Virginia Tech to garner its fourth ACC football championship in the last six years. Georgia Tech, which faces the Hokies in Blacksburg in the season opener for both teams on Sept. 3, Labor Day Monday Night (ESPN, 8 p.m.), was chosen to finish second in the Coastal with 10 first-place votes, while Clemson was projected as the runnerup in the Atlantic with 17 first-place votes.