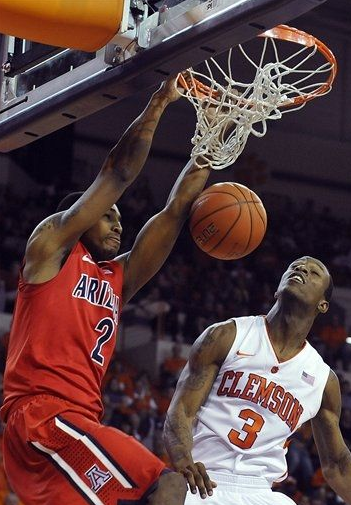 CLEMSON, S.C. (AP) — Mark Lyons scored a season-high 20 points and No. 8 Arizona used a late second-half run to improve to 7-0 for the first time in 14 years with a 66-54 victory over Clemson on Saturday night. The Wildcats squandered a 14-point lead and were down 42-36 after Rod Hall’s 3-pointer with 12:07 remaining. That’s when Arizona got moving with a 25-7 run that put the game away. Solomon Hill and Lyons began the charge with two free throws each. Brandon Ashley’s layup tied the game moments later. Lyons then found a wide-open Kaleb Tarczewski for a layup that put the Wildcats ahead to stay. When Lyons went in for a layup with 2:19 remaining, the Wildcats were ahead 61-49. Clemson (5-3) scored just two field goals in the final 8:45. Milton Jennings led the Tigers with 15 points in his return from a two-game suspension because of a drug arrest. Nick Johnson had 13 points and Hill had seven points and 10 rebounds for Arizona. But it was Lyons’ steady control that bailed the Wildcats out down the stretch. He spent his first three seasons at Xavier, helping the Musketeers to three NCAA tournament appearances. Lyons led the team with four assists and hit all five of his foul shots to keep the Wildcats out front. K.J. McDaniels scored 13 points and Adonis Filer had 10 for the Tigers. Arizona was off to its fastest start since the 1999-2000 team was 6-0 and eventually shared the Pac-10 Conference championship. The Wildcats, though, had to rally from 11 points down — Arizona committed 27 turnovers in that one — in their last game before holding on to beat Southern Mississippi 63-55 on Tuesday night. Arizona came out ready in its first trip to Littlejohn Coliseum, Lyons scoring five points and Nick Johnson hitting a 3-pointer to lead 15-4. The Wildcats built the lead to 22-8 when Hill stole the ball from Jennings and passed ahead to Lyons for a wide-open dunk. That’s when Clemson coach Brad Brownell called a time out. Clemson’s players responded in the final nine minutes of the half with a 16-6 run. Jennings, who missed the past two games after his drug arrest on Nov. 28, got the charge going with a 3-pointer, freshman guard Adonis Filer had a driving layup and two foul shots and McDaniels a high-flying putback that drew the Tigers within 26-24. Brandon Ashley hit a pair of foul shots with 8 seconds left to send the Wildcats into the locker room ahead 28-24. Their shooting was cold down the stretch, going 0 for 4 from the floor. Arizona did a much better job with ball protection, committing just six turnovers in the first 20 minutes against the Tigers. Copyright by STATS LLC and The Associated Press