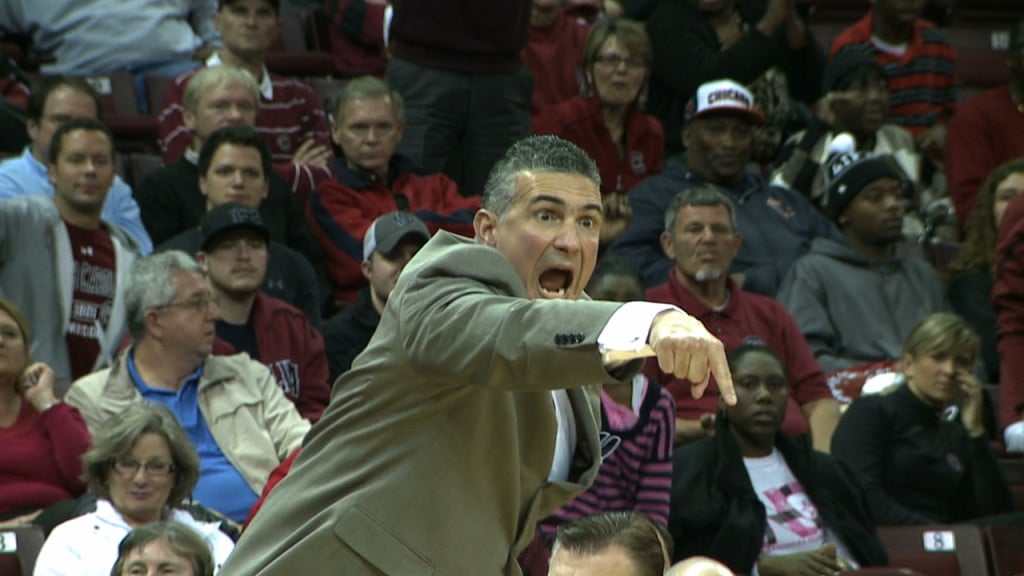 COLUMBIA, S.C. (USC SID) – South Carolina hosts Longwood in the season opener on Saturday in a 1 p.m. afternoon matinee at Colonial Life Arena. It marks the 106th season opener in Gamecock history, and the second for head coach Frank Martin in Columbia. The Gamecocks enter this season opener having won their last 12, including 11 of those at home. The contest will not be televised, but will be broadcast via the All-Access package on GamecocksOnline.com.

Carolina Quick Hits
– South Carolina is in its 106th season of basketball.
– The Gamecocks are led by Frank Martin in his second year. Matt Figger is the associate head coach, and Perry Clark and Lamont Evans are assistant coaches. Andy Assaley is in his second year as the director of operations for the Gamecocks.
– South Carolina returns seven letterwinners to its squad this season, including senior guard Brenton Williams, the team’s top returning scorer from a year ago when he averaged 11.0 points per game. Also returning to the bench this season for the Garnet and Black are senior guard Bruce Ellington, who will join the team at the conclusion of the football season, sophomore forwards Michael Carrera, a 2013 SEC All-Freshman Team selection, Laimonas Chatkevicius and Mindaugas Kacinas. Sophomore guard Austin Constables and forward Brian Steele also return for Carolina.
– The Gamecocks will hold a young roster this season, welcoming seven freshmen to Columbia in forwards Demetrius Henry, Desmond Ringer, Reggie Theus Jr., and guards Duane Notice, Justin McKie, Jaylen Shaw and Sindarius Thornwell. Transfer guard Ty Johnson joined the program last January via Villanova and will be eligible to play following the first semester.
– Justin McKie, son of Gamecock great BJ McKie, was named South Carolina Mr. Basketball, and also the Gatorade South Carolina Boys’ Basketball Player of the Year last spring after leading his Irmo squad to the state championship behind a 20-point, 10-rebound performance at Colonial Life Arena.
– Carolina owns a 76-29 (.723) all-time record in season openers, including a perfect 10-0 record in the last 10 seasons. The last season-opening loss for the Gamecocks came against the Ohio Valley’s Tennessee Tech during the 2000-01 season, as the Golden Eagles edged the Gamecocks, 73-67. The Gamecocks earned an 82-75 overtime victory vs. UW-Milwaukee in the 2012-13 season opener.
– South Carolina returns 52.1 percent of its scoring from last season and 47.3 percent of its 3-point field goals.
– Entering the season, senior guard Brenton Williams ranks fourth all-time in the Gamecock record book in 3-point field goal percentage, hitting 39.5 percent of his attempts. He paced the Gamecocks last season hitting just shy of 40 percent from beyond the arc.
– Transfer junior guard Ty Johnson will be elligible to play following the first semester after transfering from Villanova last January. In one season with the Wildcats (2011-12), Johnson averaged 3.3 points and 2.0 assists in 17.7 minutes per game.
– South Carolina will play three of its first five contests of the regular season away from Columbia, with trips to No. 25 Baylor, Clemson and No. 8/12 Oklahoma State.
– South Carolina’s non-conference schedule features 14 games, including seven home contests. Highlighting the non-conference schedule is a holiday tournament at the Hawaiian Airlines Diamond Head Classic in late December, and a mid-day contest at Baylor as part of the ESPN College Hoops Marathon in early November. South Carolina also travels to Oklahoma State in early December for the Big 12/SEC Challenge.

By The Numbers
12 – The 2013-14 season marks the 12th for Gamecock basketball competing in Colonial Life Arena. The men’s squad won its first-ever game in the venue, a 71-66 win vs. East Tennessee State on Nov. 24, 2002.
7.2 – Sophomore forward Michael Carrera led the Gamecocks and ranked sixth in the SEC in rebounding last season with 7.2 per game. Carrera was the first freshman to lead Carolina in the category since freshman forward Mike Holmes matched redshirt-sophomore forward Dominique Archie for 5.7 rebounds per contest during the 2007-08 campaign.
6 to 1 – Rookie guard Duane Notice handled point guard duties in South Carolina’s exhibition victory vs. USC Aiken last Sunday. The Woodbridge, Ontario, native dished six assists against just one turnover in the contest. He played 19 minutes before missing the final 9:54 of the contest due to cramps.
110 – Freshmen accounted for 110 of South Carolina’s 200 minutes played vs. USC Aiken in exhibition action last weekend. Sophomore forward Laimonas Chatkevicius and senior guard Brenton Williams led all returners with 26 minutes each vs. the Pacers.
6 – South Carolina attempted just six 3s vs. USC Aiken in exhibition play. The fewest attempts by Carolina in a game last season was 11, in the season opener vs. UW-Milwaukee – South Carolina went 0-of-11 from beyond the arc in that contest.
23 – South Carolina’s 2013 recruiting class was ranked No. 23 in the nation according to ESPN.com.

Up Next
Carolina hits the road early next week, traveling to No. 25 Baylor for a 3 p.m. ET matchup on Tuesday as part of ESPN’s College Hoops Marathon. The contest will be televised on ESPN.

SEC Tournament
Fresh off hosting the 2013 Final Four, the Georgia Dome will be the site for the 2014 SEC Tournament, March 12-16 in Atlanta. The Georgia Dome first hosted the tourney in 1995 and the 2014 event will mark the 11th time the venue has hosted the league’s postseason tournament. The winner of the 13-game tournament receives the SEC’s automatic bid to the NCAA Tournament. The tournament seeds are determined by the 18-game conference schedule during the regular season. Teams are seeded 1-14 based on their regular-season conference finish.

Martin’s Staff Boasts Over 90 Years Of Experience At The College Level
South Carolina head coach Frank Martin has a very experienced staff with him on the sideline this season. Perry Clark joins the team as an assistant coach with over 30 years of college coaching experience, including stops as the head coach at Tulane, Miami (Fla.) and Texas A&M-Corpus Christi. Former assistant Matt Figger was promoted to associate head coach during the offseason, and Lamont Evans returns for his second season as an assistant on Martin’s staff in Columbia.