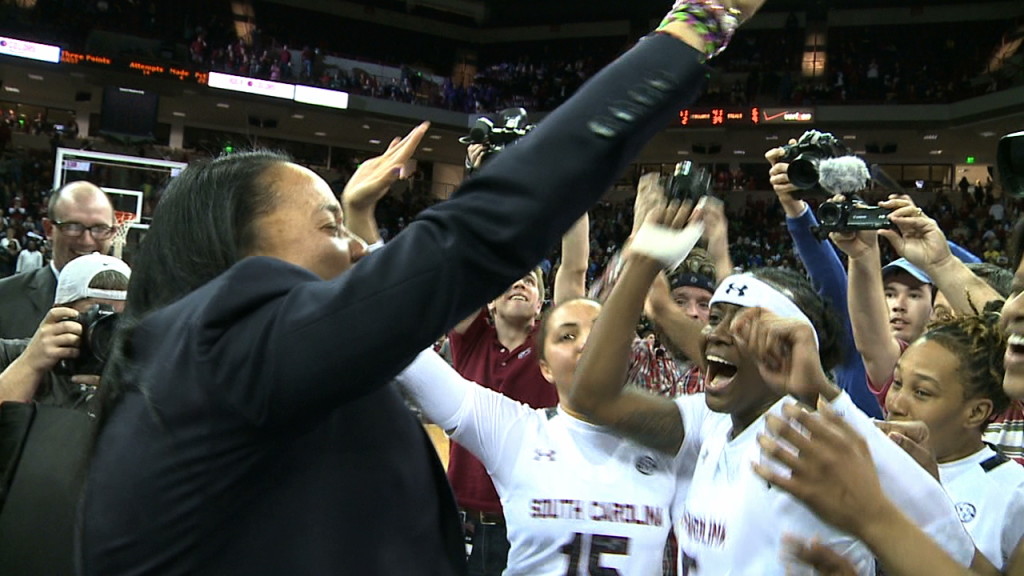 Top-ranked South Carolina takes the court at Colonial Life Arena Thursday looking to deliver head coach Dawn Staley’s 300th career victory. While the Gamecocks have won three of the last four meetings against Charlotte, the 49ers captured the last meeting at Colonial Life Arena. Complete game notes and (soon) video of South Carolina head coach Dawn Staley and student-athletes Khadijah Sessions and A’ja Wilson previewing the game are available at: http://www.gamecocksonline.com/sports/w-baskbl/spec-rel/120314aaf.html Game Information Date: Thursday, December 4, 2014 | 8 p.m. Site: Columbia, S.C. Arena: Colonial Life Arena Tickets: $7 adult, $4 youth (17 and under) Broadcast: SEC Network (Brenda VanLengen pxp, Carol Ross, analyst); online via WatchESPN Radio: 107.5 The Game (Brad Muller); GamecocksOnline.com Live Stats: GamecocksOnline.com Series History: SC leads 17-6 South Carolina Notables Head coach Dawn Staley is going for her 300th career win tonight. After putting three different starting lineups on the floor in the first three games of the season, Staley has sent the same lineup out of the last three games – Alaina Coates, Elem Ibiam, Aleighsa Welch, Tiffany Mitchell and Khadijah Sessions. South Carolina’s bench has accounted for 37.3 of the team’s 80.3 points per game this season. In fact, the Gamecock bench is rivaling its opponents’ total scoring as South Carolina is third in the nation in scoring defense at 45.5 points per game. With four Gamecocks standing at least 6-foot-4, South Carolina has scored 228 points (38.0 per game) in the paint this season, accounting for 47.3 percent of its total scoring. Meanwhile, the Gamecocks 25th in the national in 3-point field goal shooting, hitting an SEC-best 39.0 percent from outside the arc while averaging 6.5 made 3s per game to rank fourth in the league. South Carolina also leads the SEC in assists per game at 21.3, which ranks fourth in the nation. The Gamecocks have assisted on 128 of their 180 made field goals (71.1%). The team has done a great job protecting the ball as well and leads the nation in assist-to-turnover ratio at 2.0 (128:64). Defense is still a focal point for the Gamecocks, not allowing an opponent to reach the 65-point mark this season to rank third in the nation in scoring defense (45.5 ppg). In fact, in the last four seasons, South Carolina has yielded 70 or more points just seven times in 108 outings. An opponent has failed to cross the 60-point barrier in 78 of the 108 contests beginning with the 2010-11 season. Notes A South Carolina Win Would… Be the Gamecocks’ 23rd straight at home. Be head coach Dawn Staley’s 300th of her career. Make the Gamecocks 7-0 for the third-straight season, aiming to rival Staley-era best of 10-0 in 2012-13 and 2013-14. By the Numbers 1 National rank in assist-to-turnover ratio for both South Carolina (2.0) and junior Khadijah Sessions’ (11.0), who has committed just two turnovers in 113 minutes of play 2 Double-doubles by Alaina Coates this season 3 Games in which South Carolina has handed out at least 25 assists, including Staley-era record of 26 against NC Central, to help team to fourth in the nation in assists per game (21.3) 3 Games in which the Gamecocks have not allowed an opposing player to score in double-figures – Clemson, San Diego State, NC Central 3 Games in which South Carolina has drawn over 10,000 fans at Colonial Life Arena this season – there have been only four total in the nation 4 National rank for the Gamecocks in fewest turnovers per game (10.7), despite opening season with 19 against Southern Cal 5 Stats in which South Carolina is among the nation’s top five teams – assist-to-turnover ratio (1st, 2.0), scoring defense (3rd, 45.5), scoring margin (3rd, 34.8), assists per game (4th, 21.3) and field goal percentage defense (6th, .309) 8 Gamecocks who are at least 6′ tall, including four who are 6’4″ or taller 9 3-pointers made by the Gamecocks against Syracuse (Nov. 28) and San Diego State (Nov. 23), matching the Staley-era record for 3s in a game, which was previously done seven times in her previous six seasons at the helm 19 Career double-doubles by senior forward Aleighsa Welch, leaving her one shy of tying for 10th in school history – her eight in SEC action are tied for third 40 Rebounds needed for senior forward Aleighsa Welch to move into a tie for 10th in career rebounds in school history 46.5 Percent of this season’s scoring that has come from the bench (224 of 482) Charlotte Series Notes The Gamecocks lead this series 17-6, including a 3-1 record in the Dawn Staley era. The 49ers won the last meeting at Colonial Life Arena, though, taking home a 69-57 win in the second round of the Women’s NIT on March 20, 2011. South Carolina claimed the most recent meeting 76-61 on Dec. 8, 2013, in Charlotte. Four Gamecocks were in double figures, including Aleighs Welch who scored all 18 of her points in the second half after playing just six minutes in the first due to foul trouble. The 49ers trailed by just one point against the then-No. 12/10 Gamecocks, who then out-scored Charlotte 43-29 in the second half.