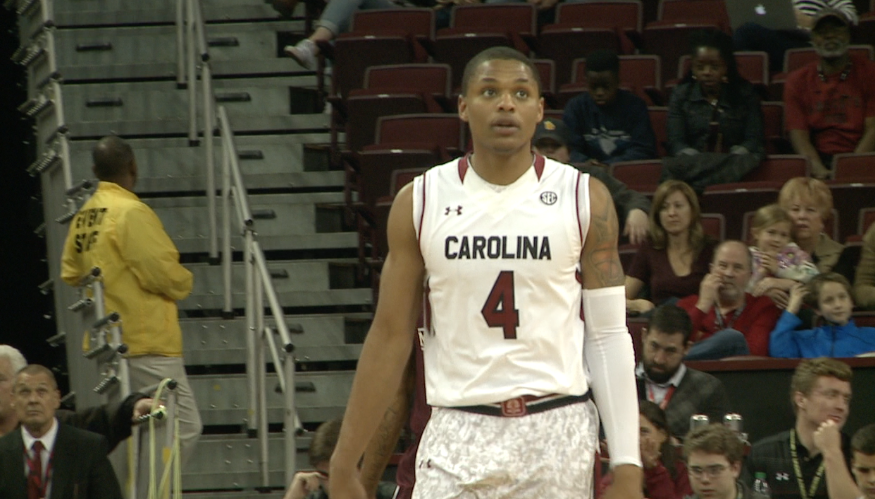 COLUMBIA, S.C. – Behind a career high 28 points from senior guard Tyrone Johnson, the Gamecocks posted an 81-68 victory over Mississippi State (12-17, 5-11 SEC) on Saturday night at Colonial Life Arena. South Carolina (14-14, 5-11 SEC) shot 46.3 percent (25-54) from the field in the victory, its highest percentage in 12 games. Junior forward Laimonas Chatkevicius matched a career high with 18 points in the win, and the duo of Johnson and Chatkevicius scored a combined 33 of Carolina’s 42 second-half points. A slow six minutes to begin the game soon gave way to an offensive shootout as the two teams combined for 70 points in the first half. A jumper from Tyrone Johnson gave Carolina a 9-4 lead after Mississippi State scored the game’s first four points, but the Bulldogs would ignite from the field over the next 11 minutes. MSU made 11-of-14 shots in that span, but would still be unable to take the lead back from an equally accurate Gamecock squad. Six 3-pointers in the first half alone would be the difference as Carolina brought a 39-31 lead to halftime. Duane Notice would make three, matching Mississippi State’s entire team output, and Sindarius Thornwell hit a pair to lead the way. The team’s starting five combined for 35 first-half points, led by Notice’s nine. Both teams made half of its shots or better in the first 20 minutes, with the Bulldogs hitting 59 percent to Carolina’s 50 percent. Early in the second half, Notice hit his fourth 3 of the contest to extend Carolina’s lead to nine at 42-32. Shortly after, a technical foul was called on the Gamecocks and the Bulldogs would connect on 3-of-4 from the foul line to pull within five at 43-38 with 17:38 remaining in the half. Three lay-ups from Chatkevicius and a pair of free throws from Mindaugas Kacinas would give the Gamecocks a 12-point advantage at 50-38 with just over 15 minutes remaining. The Carolina lead would balloon to as many as 18 points at 59-41 with 12:39 remaining, but the Bulldogs would continue to battle, closing the lead to 12 behind a layup and two free throws from Craig Sword, and another two at the line from Travis Daniels. Johnson and Chatkevicius would combine to score the next 11 Carolina points and the Gamecocks would hold a 70-53 lead with 6:23 remaining. MSU’s Sword would answer the duo’s run, however, with a seven-point swing of his own to pull the Bulldogs within 11 at 7-61 with 4:14 to play. The teams would trade made baskets over the course of the next two minutes, and a 3 from Sword would pull the Bulldogs within nine at 74-65 with 2:44 to play. The Gamecocks would hold their lead, hitting 7-of-8 from the free throw line in the final minutes, including a 6-of-6 effort from Johnson, to close the 81-68 victory. Sword led MSU with 26 points, hitting 10-of-14 from the field. Gavin Ware also scored 10 points for the Bulldogs.