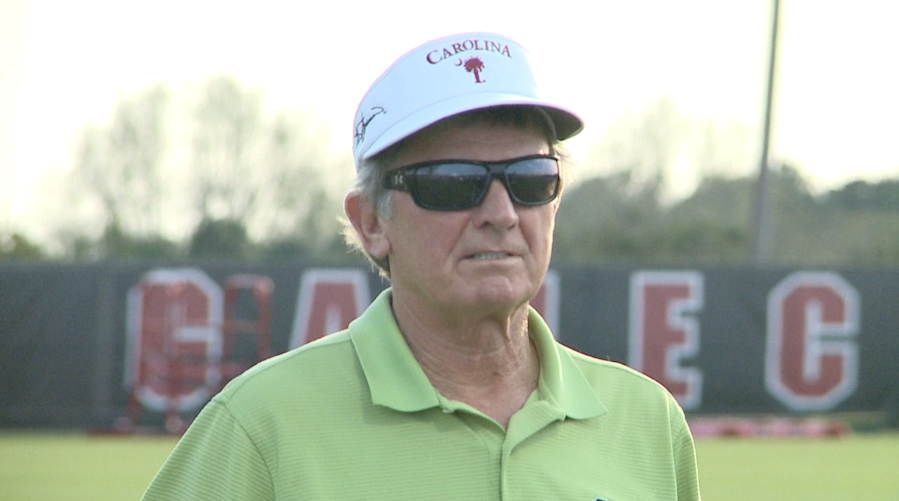 COLUMBIA, S.C. (USC SID) — The 2015 version of South Carolina Football took to the practice fields for the first of 15 spring practices on Tuesday afternoon. Perfect weather conditions greeted the squad, as it worked out on the new practice fields, located on the west end of Gamecock Park, for the first time. “I think we had a pretty good first day,” said head coach Steve Spurrier. “The guys seemed a little faster and quicker this time of year, which is normal. We‘re just out here running plays, trying to get guys lined up. We‘ve got a alot of new players as we all know. They showed a lot of hustle and effort.” One of the big questions of the spring is determining who will take over the quarterback duties after Dylan Thompson handled nearly every meaningful snap last year. Connor Mitch is listed first on the depth chart, ahead of walk-on Perry Orth and redshirt freshman Michael Scarnecchia. Whoever wins the job will be working with a corps of mostly untested wide receivers. “I think Connor Mitch threw the ball around pretty well,” noted Coach Spurrier. “He and Perry Orth. They all did well. The receivers caught most of them, but dropped a few. Pharoh Cooper is the only receiver who has played quite a bit, so they‘ll be a lot of new faces at wide receiver,” added the Head Ball Coach. The Gamecock defense struggled for much of the 2014 season, and Coach Spurrier brought in Jon Hoke as co-defensive coordinator to improve that side of the ball. Getting pressure on the quarterback, something the Gamecocks could not do consistently last season, will be one of the points of emphasis. “We‘re only be as good as we are up front,” said co-defensive coordinator Lorenzo Ward. “We‘ll try to get the front seven better. If we‘re better up front, we‘ll be better on the perimeter.” Coach Ward said that he and Coach Hoke have meshed well. “Jon‘s a great guy,” said Ward. “We get along real well – the whole staff. We all have a say so.” One injury was suffered during practice on Tuesday, as Larenz Bryant was hit in the stomach and was taken off the field for precautionary measures. Coach Ward also confirmed that defensive tackle Taylor Stallworth would miss the entire spring after undergoing surgery on a torn pec muscle last week. Dexter Wideman and Wesley Green were absent from practice on Tuesday, as they were disciplined for missing too many classes. “When you miss class around here, they don‘t let you practice,” said the Head Ball Coach. “We enforce going to class and they missed too many.” The Gamecocks will return to the practice fields on Thursday. That practice is closed.