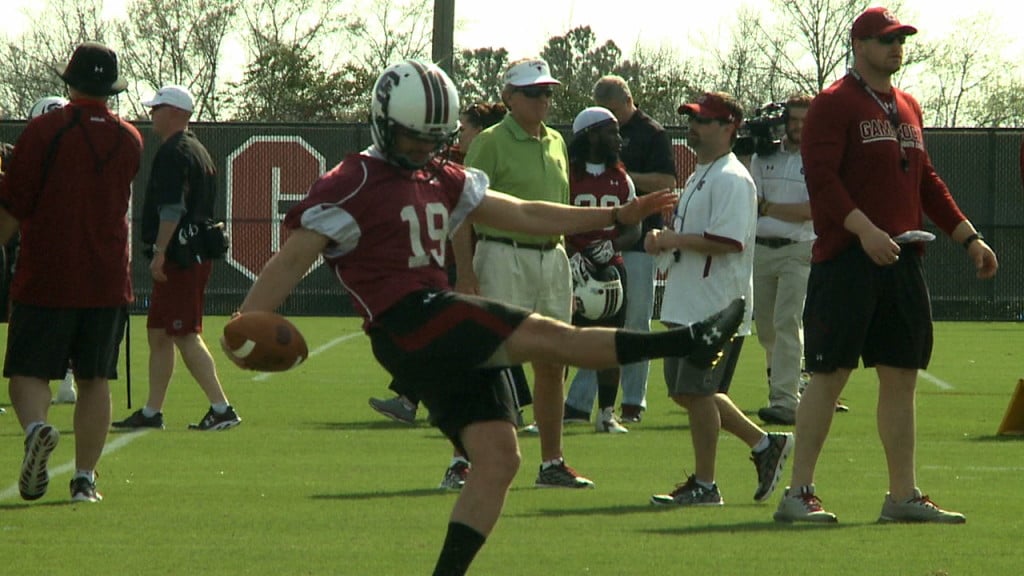 COLUMBIA, S.C. (USC SID) — The University of South Carolina football team worked out in helmets and shoulder pads for about two hours Thursday afternoon at the new practice fields. It was the squad‘s sixth practice of the spring. The Gamecocks are slated to practice two more times this week. They will work out Friday at the practice fields, then move into Williams-Brice Stadium on Saturday for the first official scrimmage of the spring. Both of those practices are closed, including Saturday‘s scrimmage due to the on-going construction around Williams-Brice Stadium. Head Coach Steve Spurrier indicated that all four quarterbacks would get into Saturday‘s scrimmage, but would not necessarily take an equal number of snaps. “(Brendan) Nosovitch is obviously our running guy with a little passing here and there. The other three (Connor Mitch, Perry Orth and Michael Scarnecchia) can run a little bit, but they‘re mostly passers,” said Coach Spurrier. One player who doesn‘t expect to get many reps on Saturday is wide receiver Pharoh Cooper, a first-team All-SEC selection from a year ago. Cooper is working hard in an effort to produce the numbers that he put up in 2014. “The whole goal this upcoming year is to do better than what I did last year,” said Cooper. “It‘s going to be harder as defenses will key on me a lot more.” Cooper has been working at the “Z” position, the same spot he played last season, but is capable of playing all three wide receiver spots. “If I had to go out there because somebody couldn‘t play that position, I could go out there and play if I had to.” A versatile performer who excels with the ball in his hands, Cooper has also been working this spring at the “wildcat” quarterback position and returning punts. Coach Spurrier has been impressed with the defense through the first six practices. “The defense looked good. They‘re disguising (their coverages) and looked pretty good. They seem to be a little quicker and faster than we were last year.” Defensive end Gerald Dixon was one of several players who did not practice on Thursday. “Gerald got kicked in the shin and went down the other day. He should be ok.” Others who wore yellow “no contact” jerseys included Cedrick Cooper (ankle), Mason Zandi (hamstring), Mike Matulis (knee), Taylor Stallworth (pec muscle), Larenz Bryant (liver), Sherrod Pittman (leg), Brandon Shell (shoulder) and Darin Smalls (knee). Dexter Wideman was not at practice on Thursday and will not practice again on Friday, as he missed class, according to Coach Spurrier. “No excuses,” said the Head Ball Coach. “If he misses another one, he‘s not going to suit up for the first game. Dexter needs to get his tail in class and he‘s got no excuses this time.” The SEC Network was on campus Thursday and will return on Friday, with Tom Luginbill and Booger McFarland on hand to tape some segments for SEC Now‘s Spring Football Tour. That show will air Friday, March 27, at 10 p.m. ET on the SEC Network.